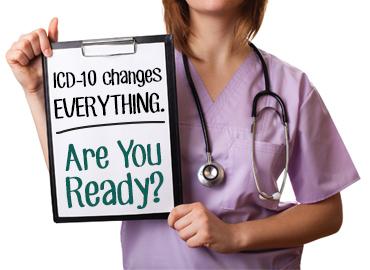 The cost study provided by the AMA increased the financial burden for physician practices to the following ranges with the low number being the best case scenario:

According to the AMA, two-thirds of practices in the U.S. would fall into the upper range.

The study broke down the costs into seven categories.

The Professional Association of Health Care Office Management found that the actual cost of transitioning, especially for small practices, was lower than the initial estimate. The 2015 study, published in the Journal of AHIMA, surveyed 276 practices in the process of making the change to determine what it was costing them. The bulk of the participants stated the cost factor was significantly less than what they anticipated. The study only provided data for small practice as larger organizations failed to respond to the query.

The goal of the researchers was to dispel some of the rumors about making this transition, especially the potentially inflated cost estimates. The survey respondents were asked to specify how many providers they had in the practice, including physicians, physician assistants and nurse practitioners. The questions covered total expenditures for ICD-10 such as:

The practices reported their costs to be around 8,167 dollars with per provider expenditures averaging 3,430 dollars. That number dropped for clinics with at least six providers on staff.

Overall, the practitioners found the cost of educational materials to be nominal. Many software vendors offered upgrades to ICD-10 compliant systems at no cost, as well. They were able to download superbills specific to each discipline via the Internet for free, bringing costs even further.

Although there is no data available for larger practices, if this survey is any indication, the change over to ICD-10 did not have the financial impact that many felt would cripple medical businesses around the country. Instead, the cost was minimal and the transition smooth.

Have questions about buying or selling a practice?

Most doctors looking to buy or sell their practice can’t find the time to figure out the complicated steps involved. At Transition Consultants, we’ve created a process that makes the transition painless so they can move into their next season and start living life on their own terms.